Last weekend I was at Omijima, near Nagato. There is a very scenic and peaceful place there called Alps of the Sea. It is given this name because of the alp-like rock formations that rise from the sea. I arrived there about one hour before sunset. I wanted to photograph the sunset, as well as search for a good location to photograph the Perseid meteors which were predicted to peak on this night, August 12th.

I decided on this location for the dark skies and the rock formations that would be a good foreground for the night skies. It being the O’bon holidays, I thought the place would be crowded with sightseers, but that was not the case. I only saw a family of four during the whole evening and night. Oh, and one weasel whose eyes reflected the light from my headlamp as it gazed at me from the cliffs above. Another reason for the lack of people could be that perhaps some Japanese stay away from the beaches in the belief that the spirits of the deceased rise up out of the seas during O’bon. Anyway, I had the beautiful, secluded beach all to myself. I remained there through most of the night, and finally left at around 3:30 am, after taking about 1000 photographs. In those photographs, the camera sensor captured 42 meteors, the best of which are included at the end of the time lapse movie. I counted over 200 that night, including a fireball that streaked across the sky, right above my position. It seemed to be following the band of stars that form the Milky Way. During that four second flash across  the zenith of the heavens, I could only manage a long “Whooa”!

Note: The bright lights of two fishing boats, (to attract squid) illuminated the rocks and trees up to second 26 in the video. Suddenly, there were only silhouettes as the fishing boats switched off there lamps and headed back to harbor. 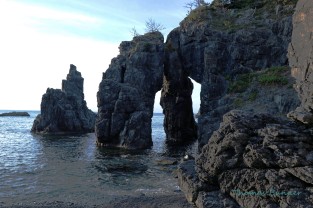